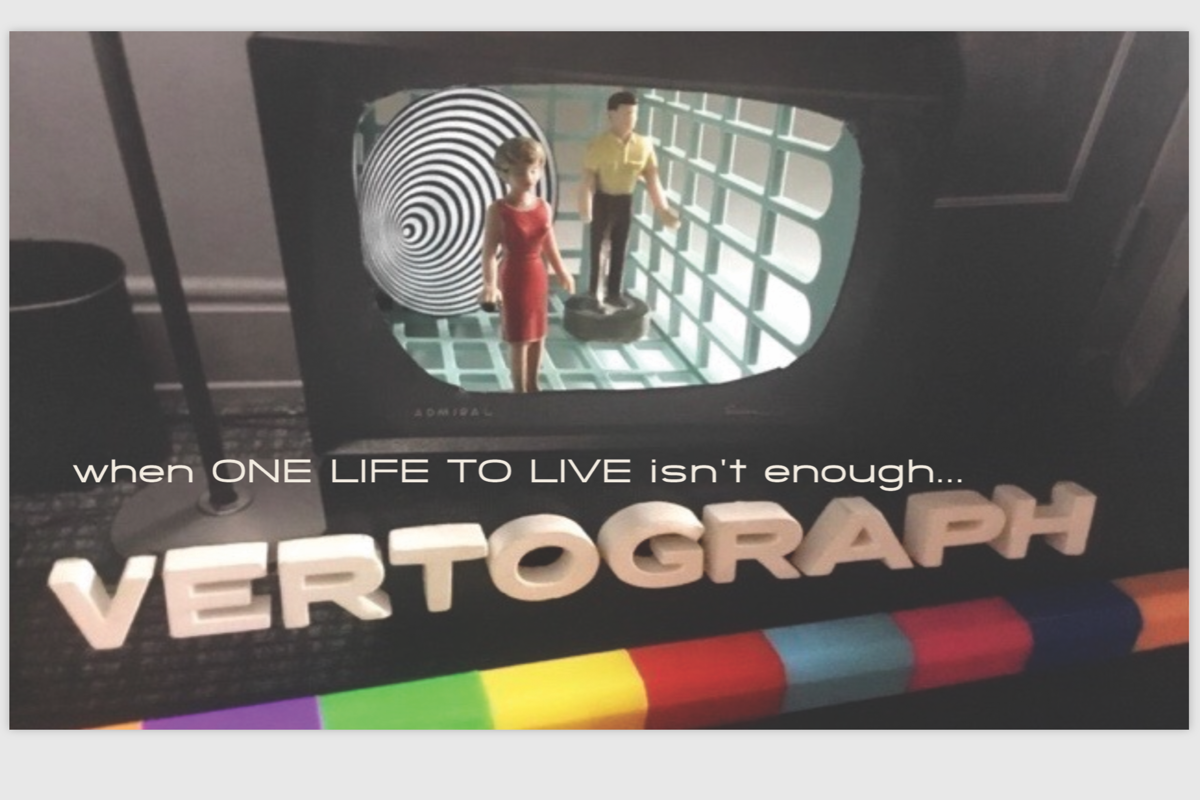 Dullsville, 1963. Debbie wants boobs, Timmy gets beat up at school, and Barbara's glued to Soaps until a mysterious toy blasts them to the 4th Dimension. Infidelity, Sorrow, and a woman's 'Search For Tomorrow’

VERT-O-GRAPH is a remount of Marvel Ann’s ‘04  Comedy/Adventure that goes deeper into the neurosis of “Mrs. Barbara Anderson”; her obsession with Soaps,’Contemporary Cul-Du-Sac’ magazine, and the reasons  why  her family has to eat and sleep standing up. After discovering a mysterious toy, Barbara  finds herself in a parallel universe where a galactic groundskeeper helps her come to grips with her daughters budding sexuality, her homophobia towards her son “what’s with the S’s?”, and the collapse of her marriage. Beneath the absurdities of cheerleaders, ghosts, and erupting volcanoes lies a message about identity and enlightenment in the Kennedy era.  Critic John Townsend has called it  “one of LeFebvre’s most brilliant works”

“Marvel Ann Theatre has been one of the nation’s great ensembles in the realm of camp satire...” and is the oldest queer theatre company in the Fringe.Starting with its musical mash-up FUNNY SOUND OF MUSIC GIRL (starring newcomer Ann Michels) in 2001, Writer/Director Dennis LeFebvre has created”...some of the wittiest, campiest productions ever seen in the Twin Cities. He may be our best kept secret genius “(Lavender Magazine)

Specializing in high-concept, queer-centric comedies, Marvel Ann combines vintage film genres with the collective kitsch of our subconscious. It believes in the transformational power of theatre; casting newcomers alongside pros, and has featured 3 ‘out’ Ivey Award winners. Jim Lichtscheidl (a frequent collaborator), Ed Williams Jr  (All About Steve) and Jairus Abts (‘Lester’ in the original VERT-O-GRAPH) # It’s biggest success came at the height of the same sex marriage debate with THE SECRET LIFE OF KITTY WILLIAMS  about a washed up movie star who has an interspecies love affair “A well crafted spoof on schlocky horror films with a delicious lead crossgender performance by Dennis LeFebvre”(Star Tribune)“LeFebvre packs this comedy and love story with so much fast paced humor, sass and strong characters that it’s a shame when it ends. A must see! (Pioneer Press)